The Ramazzano Castle is a unique place that welcomes its guests on an extraordinary journey to discover the beauty of its traditional places and ancient flavors, including excellence, quality, passion for good food and joie de vivre. The staff takes care of the guests mindful of every detail with dedication, guided by a deep spirit of friendship and hospitality, sharing the tastes and beauties of the place and the surrounding area.

Umbria is a region rich in history, art and uncontaminated landscapes immersed in the green of our valleys. A land where you can re-discover the natural rhythm of life and taste the genuine flavours of the products of the earth. Cities shaped by ancient history, enriched by splendid works of art and overlooking unforgettable panoramas.

“Perugia, equipped with great means of defense from nature and man’s hand, suddenly rises on a hill” (Charles Dickens Pictures from Italy, London 1846)

The historic center of Perugia develops around the thirteenth-century Fontana Maggiore and unfolds in a long series of up-hills and down-hills, streets and alleys, and stairways, underground paths, unusual and picturesque views of splendid landscapes.

During the medieval period, Perugia experienced a period of great wealth and ambition that led to the enrichment of the whole area, of ​​the historic center with splendid monuments: the Fontana Maggiore, the Aqueduct, the Sala dei Notari, Palazzo dei Priori, the Rocca Paolina (where the ancient medieval alleys of Perugia have remained unchanged) and many others.

Perugia has an historic center that must be discovered step by step, without haste, letting yourself be enchanted by the history and the splendid works of art scattered on these hills in the centre of Umbria.

The National Gallery of Umbria is located inside Palazzo dei Priori and it preserves the largest collection of work of Umbrian art from the thirteenth to the nineteenth century: inside there can be found works by Arnolfo di Cambio, Duccio di Buoninsegna, Gentile da Fabriano , Benozzo Gozzoli, Pinturicchio and obviously Perugino.

The ancient Etruscan history of the city of Perugia is described in the Archaeological Museum, set up inside the convent of San Domenico, and by the Hypogeum of the Volumni, a wonderfully preserved Etruscan tomb dating back to the second half of the second century BC.

Other important museums to be included in the visit of the city are: Collegio del Cambio, Collegio della Mercanzia, Chapel of San Severo (which contains a painting by Raphael), Chapter Museum and Museum of the Academy of Fine Arts.

The churches of Perugia describe the ancient history of the faith of the Perugian people and testify the importance of Perugia within the Papal States during the medieval period: in fact, numerous popes resided in the city and four of them were elected in the Cathedral of Perugia: Honorius III, Honorius IV, Celestine V and Clement V.

The Cathedral of Perugia is dedicated to San Lorenzo and it is located on the main square, facing the Fontana Maggiore and Palazzo dei Priori. Inside there is the wedding ring that, according to popular tradition, St. Joseph gave to Mary.

The temple of San Michele Arcangelo, called by the Perugians “Tempietto”, is the oldest church in Perugia: it dates back to the 5th century, but it was almost certainly built on a pre-existing Roman cult building, probably a Mithraeum, which was built on an Etruscan temple, in a sacred place of the city.

The churches of San Domenico and San Pietro are both located along Corso Cavour. The first is enriched by a splendid stained glass window, among the largest in Europe, while the second is a real casket of works of art dating back to the XV-XVI century. In the church it is also possible to visit one of the most ancient medieval vegetable gardens of Italy.

Bevagna, thanks to its unchanged medieval charm, has become part of the exclusive club “Most beautiful villages in Italy”.

Together with Montefalco, it is one of the places where there can be found the famous vines that give rise to the Sagrantino wine. The production area of ​​this wine is called “La via del Sagrantino” and it includes the towns of Gualdo Cattaneo, Castel Ritaldi and Giano dell’Umbria.

It is really suggestive to walk along the streets of Bevagna, in particular during the month of June during the “Mercato delle Gaite” festival, when the four “Gaite” (the areas that used to divide the city) set up craft shops, taverns and typical medieval markets.

Montefalco is also called the Terrace of Umbria, thanks to its position overlooking the wide Umbrian valley between Perugia and Spoleto. Within the ancient city walls, the most important buildings to visit are: the Town Hall (13th century), the church of S. Agostino, the Romanesque church of S. Bartolomeo, alongside the nearby portico of Federico II (1244), and the church of Santa Chiara, with its paintings from the Tuscan-Umbrian school. Another important place to visit is the church of San Francesco (14th century), which today is the house of the Pinacoteca. Inside the building, there are paintings of great artistic value, such as a Nativity by Perugino and the extraordinary cycle of frescoes in the Stories of San Francesco, painted by Benozzo Gozzoli.

In addition to its artistic and architectural beauties, Spoleto is best known worldwide for its “Festival of two worlds”. Conceived in 1957 by the composer Giancarlo Menotti, the festival takes place every year from the end of June to the beginning of July, and it is one of the most prestigious international festivals of music, art, culture and entertainment. 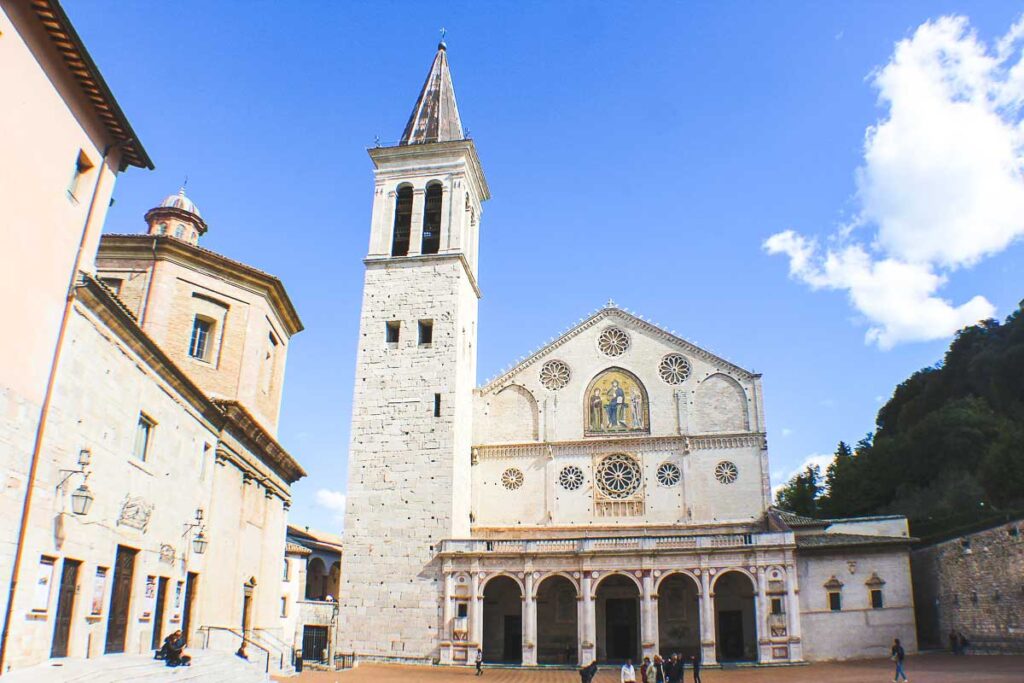 You enter the Cathedral square through a scenic staircase that introduces the viewer to the splendour of the Cathedral of Santa Maria Assunta, built in 1067 on the remains of a 9th century church. Inside the Cathedral the frescoes by Pinturicchio in the chapel of Bishop Eroli and Filippo Lippi in the apse of the central nave are unmissable. To the side of the Cathedral there is the Caio Melisso theater, the first Italian public theater, one of the oldest Italian theaters (it was built in 1667), built on an entirely wooden structure. 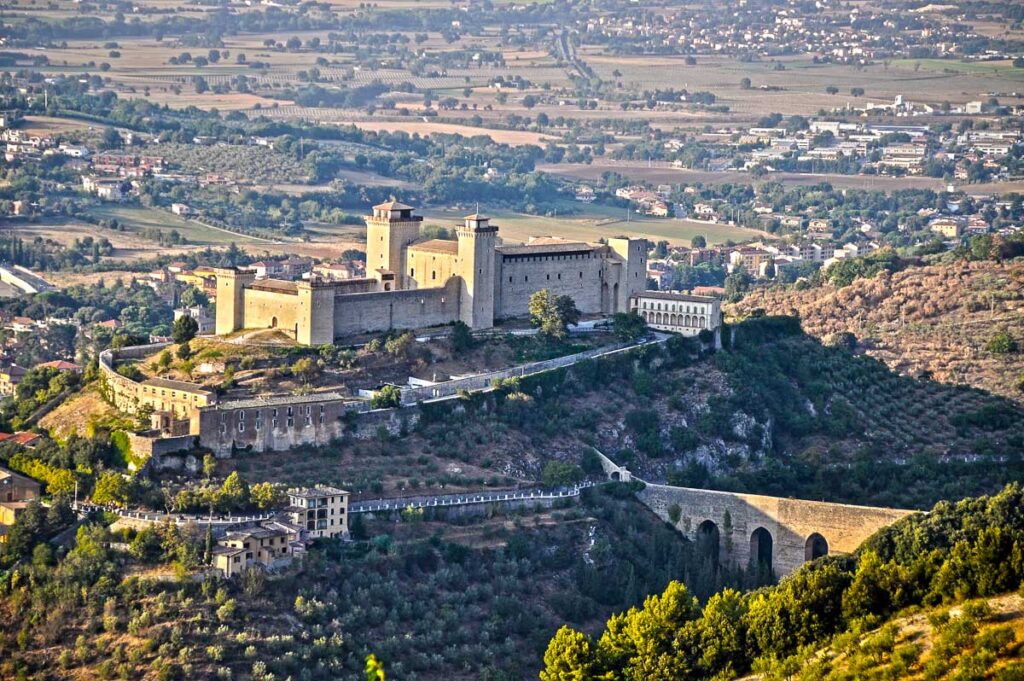 It is a fortress that completely overlooks Spoleto. It was built by Cardinal Albornoz, between 1363 and 1367, in order to strengthen the authority of the Church in the territories of central Italy, due to the imminent return of the papal seat to Rome after about seventy years of its stay in Avignon. The other Albornozian fortresses are located in Assisi and Narni. Inside its rectangular structure there is the National Museum of the Duchy of Spoleto, which hosts works of art made in the Duchy of Spoleto (4th-15th century). 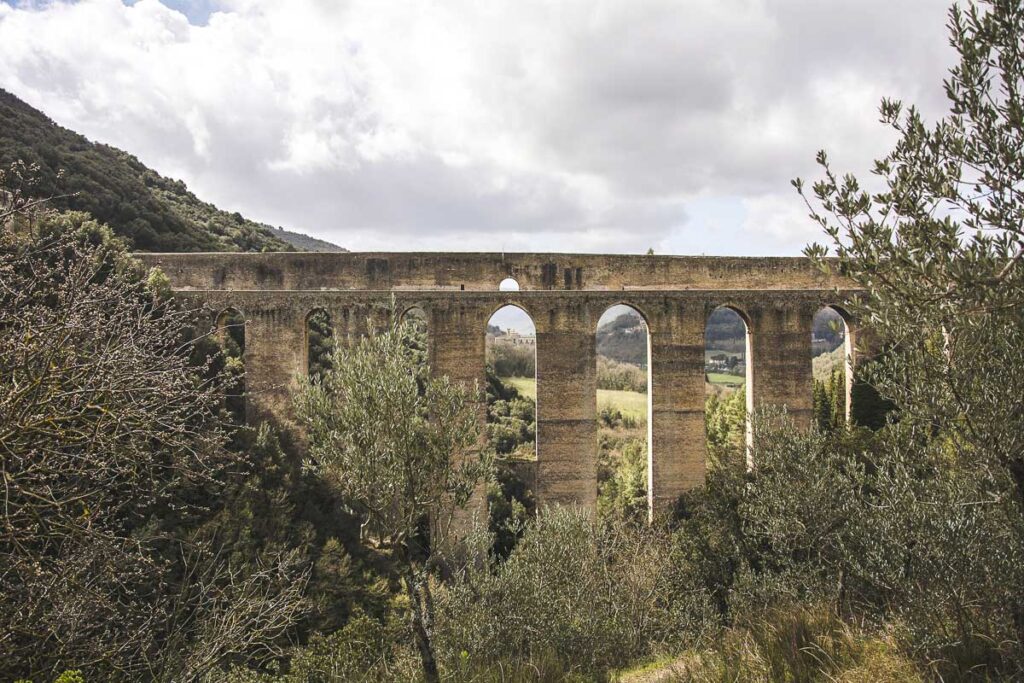 The Ponte delle Torri is the symbol of the city of Spoleto. 230 meters long and 82 meters high, it was built to connect the city of Spoleto to the Cortaccione aqueduct. It is a Roman-Lombard piece of work and its uniqueness is emphasized by the fact that there are no more works of art from that time that can match the complexity and grandeur of the bridge.

What are you waiting for?

Contact us for more information, prices and further details.